Today was the day of four glens; Glen Garry, Glen Loyne, Strath Cluanie (pronounced Clooney, like George the door to door coffee salesman) and Glen Affric. So it would be up, down, up, down, up and down again.

The morning was also a midge filled nightmare and I only opened the tent at the last moment, already smothered in smidge and adorning my head net. Although after only a minute or so a number of midges had made their way into my head net. This was not the first time and the only explanation I can find is that the holes are not small enough. Grrr, who makes a midge net that midges can penetrate?

A very brief stint on the road led to the path up Allt a’ Ghobhainn and up to the first bealach. I could feel the effects of the long day yesterday and struggled a bit going up what was a relatively easy path, although stopping to look back at the view was very rewarding. At the top the River Loyne came into view, my first proper river crossing, and if it was impassable would have to involve a very long detour along the busy A87 – not ideal – so I was a little apprehensive.

I descended into the valley along a boggy path and over a stile. That doesn’t sound too arduous does it? Well the stiles round here are monsters, designed for giants, they get you over the 8′ deer fences in 3 easy steps – that’s nearly 3′ per step! For my little legs that’s quite a feat and takes a concerted effort when fully laden. Oh and when I say boggy, I mean boggy. 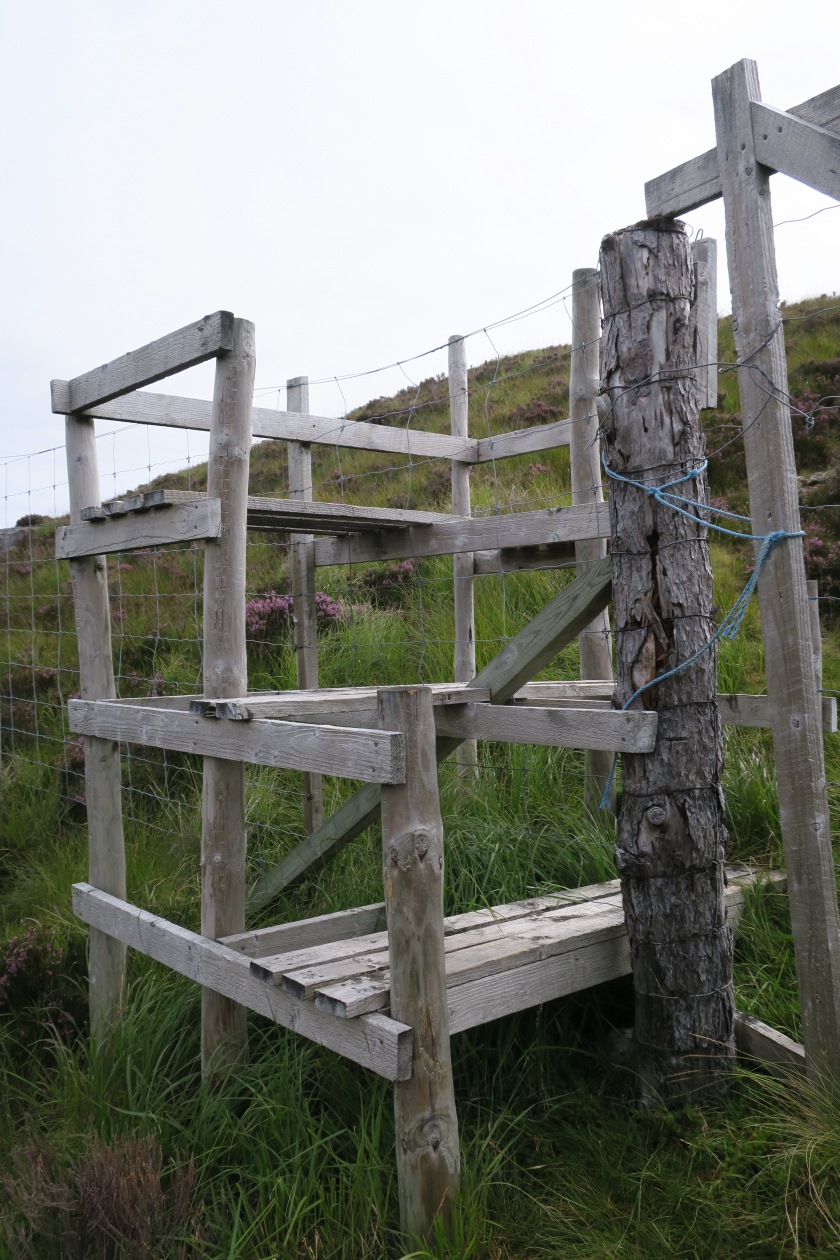 I got down the river and it was easily crossable so I picked my crossing point, changed into my sandals, rolled up my trousers and waded across. I took a moment to relax on the beach on the other side whilst letting my feet air dry. Whilst I was sat here I saw people…! Here’s a ‘Where’s Wally?’ type challenge, see if you can spot the two hikers in this shot:

Then it was back up the side of the valley on a pathless stretch alongside a stream to join a track which was the old Skye road. I was relieved to be on more solid ground but after about 20 paces, I shouted ‘boring’! It was about 1.30pm and I was starting to get hunger pangs but was holding out for the Cluanie Inn. It was another 90mins before I arrived and I demolished a burger, washed down with half a pint and then got on my way again. I still had about 6.5miles to go to the hostel. 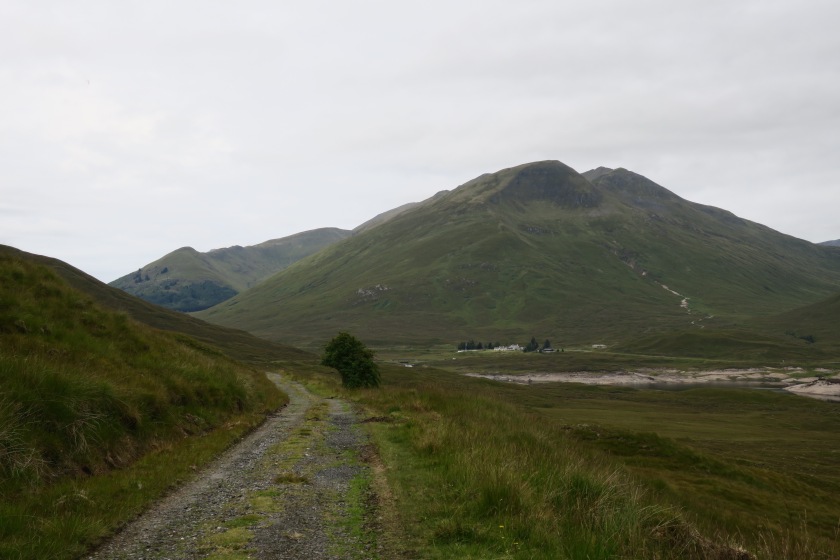 A track leads off the A87 and up Allt a’ Chaorainn Mhoir and peters out after a couple of miles, turning into a quagmire with the path becoming less and less distinct. I lost it briefly and decided to climb to drier ground only to reach a fence with the gate and stile back down the hillside. I begrudgingly trudged down to it and then picked up the path once more. I was getting tired and just wanted to be at the hostel, but my feet had other plans. I lost my footing and took a trip into a bog. With my bag weighing me down I writhed around a bit trying to get back up, so when I eventually stood up I could feel the cold boggy water trickling down my legs under my trousers. Lovely. I grit my teeth, “only 3 miles to go”. When I reached a stream I attempted to rinse some of the bog off me and it was at this point that the midges decided to descend on me. I was tired, bog soaked, the hostel wasn’t yet in view and now midges were gnawing at me. “Whose idea was this?” I shouted and then burst into tears. I took a deep breath, gathered myself together and then pressed on. I would be showered, warm, dry and tucking into dinner within 2 hours.

When I arrived at the hostel, I had a very warm and welcoming reception from the warden who offered to put the kettle on the wood burner. The hostel at Glen Affric is very remote, with no track access and no mains services. Hanna the warden lives there 3 weeks on, 1 week off for 6 months, so you feel like she’s welcoming you into her home. They have a wind turbine and a solar panel which charge a battery for the electricity, the stove heats the common room, the hot water tank for the sinks and shower and dries out wet gear and there is a gas bottle for the hob. And that’s it – no fridge/freezer or electric kettle, the rooms aren’t heated and you can only charge devices if the battery has enough juice. It’s beautifully simple, back to basics living and yet homely and very comfortable.

Due to two long tough days and a poor weather forecast – from what we knew – I decided to spend the day enjoying the warm hug of the hostel and the views from the windows. For the whole day it was just me and Hanna, she was touching up some paint work and I did a 1000 piece jigsaw puzzle (Hanna helped a little).

View from the hostel window

More overnight rain led me to listen to Hanna’s and the other hosteller’s advice and avoid my planned route because there were countless streams that would be in spate. Furthermore, I’d learned that my phone had come for the bog swim too and by the process of elimination determined that the charging port was defunct. I would head west along the more established Affric Kintail Way to the campsite at Morvich where if necessary I could take a bus to Inverness and it’s Apple store and then head back NE and pick up my route again the next day.

The walk was uneventful except for popping into a nice bothy for a wee break and an encounter with a very large bull. I gave it a wide berth but it still stood up and stared at me as if it were imagining how tasty a slice of my chargrilled rump would be.

After I’d pitched my tent, I set to work on my phone and after an hour or so it began to charge. It wasn’t a one-off and it seemed that maybe it was at last drying out. I headed to the lochside restaurant for fish and chips and was treated to a spectacular sunset.

I had a sort of accidental lie in – got distracted by the campsite wifi – and eventually left at 10:30. Initially walked up through a forest and there were showers blowing through. It was a long climb up to the bealach where I rejoined the guidebook route at the Falls of Glomach. Right by a big red sign that says “Danger please take great care” I slipped over again, somehow less disastrously this time, but it gave me a bit of a fright as the gorge was deep and rocky. I set off down the wrong precarious path – it’s just a way to get a good view of the falls. I was a bit distracted to really enjoy the waterfall, but it is mightily impressive. I then retraced my steps and set off along the correct precarious path. There were a couple of scary moments scrambling down big, rounded, wet boulders with a fairly sheer drop to one side and on occasion my bag was in the driving seat – as it were.

Falls of Glomach
I got to the bottom and heaved a sigh of relief. Having slipped/skidded again I gave myself a good talking too; “concentrate Wood, if you keep slipping like this one of these times it might hurt, a lot”. I then looked at my upturned boots and noticed that they were getting smooth at the front…ah that would explain my frequent slips. I got to a farmstead at Carnach which had some Highland cattle grazing and I was able to sit by Loch an Leitreach while the breeze kept the midges at bay.
It was then the last stretch up An Crom-allt over the bealach and down the other side to my destination for the evening; Maol Bhuidhe bothy. Again there were plenty of midges about and so I spent the vast majority of the evening inside.