I woke up to some light rain and as I only had a short day of around 6miles to get to the rendezvous that Rob and I had arranged, I turned over and went back to sleep. When I did rise I pottered about – poked the still smouldering fire (despite dousing it the previous night) – and packed up extra slowly. I eventually set off at 10:30 and decided to ring tonights campsite just to check they had space…and they were full, d’oh. I frantically searched for a nearby alternative, also full and the next one was full too. I expanded my search radius and eventually found one that could accommodate us, but could I get to it? Yes it was actually only 4 miles beyond the original site, but I had started much later and was not mentally prepared for a ‘normal’ length day. Hey ho, better get cracking.

The route out of Ellastone went through woods and it was a surprisingly pleasant jaunt and not too overgrown. Halfway along I passed by Motcarn Sprink whatever it may be? Neither the map nor guidebook can shed any light. The brief rain shower in the morning had made the grass wet and soon soaked my boots and trousers so I opted for the shorts and gaiters look – sexy!

Across a road the path deteriorated (more bashing was required) and when I popped out of the wood I approached a farm and followed the map and guidebook to a farmyard. I was looking for the correct gate when I was approached by a snooty woman who asked condescendingly “are you lost?”. I replied that I knew exactly where I was I just couldn’t see the path. She informed me that I should not have come the way I had despite following the right of way – I think they were in the process of getting the path rerouted but lacked sufficient signage in my opinion. A disagreement was side stepped and she allowed me to take the private access road to the path.

After a cheeky half in the pub at Swinscoe I stopped for lunch on a bridge over the River Dove which marked my true entry in Derbyshire – whoop! The last part to the campsite was easy so I pitched up, showered, ate (as is my usual routine) and headed to the pub to await Rob’s arrival.

Rob arrived on time and at the campsite produced a bottle of wine, I could feel the effects in the morning! We retraced my steps from the previous evening to the pretty village of Thorpe and then headed to Dovedale via Thorpe Cloud. The short climb was worth it – the views were spectacular and it made me smile when I realised that I had walked from the horizon or “from as far as the eye could see”.

Dovedale was gorgeous and not overly busy given it was a bright Saturday in June and a local beauty spot. It strikes me when I pass through places how it only takes a couple of minutes to get away from the crowds. People tend to swarm around a specific place and not venture beyond a very small perimeter – hence ‘honeypot site’ I suppose!

Onwards through Biggin Dale which was initially quiet we got caught up on the route of a charity walk and found ourselves going the opposite way to hoards of fairly miserable people on a narrow path – they were about 25miles into their 28mile route but only a few could raise a smile.

The last few miles were a bit of a drag and not particularly interesting walking – the main excitement (for me anyway) came from a number of fields of cows. Luckily Rob was there for me to cow-er behind and to moo-ve them on when necessary, so no drama!

After setting up at the campsite we headed into the village of Youlgreave for some much needed sustenance. We found that the wells had been dressed which was a nice surprise but didn’t hang around – just took a couple of pictures and moved on. Rob was understandably bushed and although I was fatigued I’m somewhat used to it, plus I didn’t walk 18miles on my first day so fair enough!

Much to Rob’s relief we had a shorter day ahead of us, so the morning was more relaxed. We left via Alport and soon found a lost DofE group who were after some help so we let them them follow us until our routes diverged. Haddon Hall then came in to view and just at the right time for coffee and cake, luckily they let us into the grounds without buying a ticket. I had a delicious cream scone and tried – and I think succeeded – to eat it with dignity. The salubrious surroundings and “white glove service” were a welcome departure from a cereal bar sat in a field.

Onwards from Haddon Hall, across the River Wye (not the one down the Welsh border?) and over some rolling hills and Chatsworth House came into view as did the village of Edensor. We headed down the grassy field to find a nice little tearoom nestled amongst all the identically painted cottages – Chatsworth blue I think it is, I shall have to remember that one for the future, it’s a very earthy blue. After yet more scrummy food including more cake(!) we wandered by Chatsworth House a stunningly quintessential English country estate which I’d not set eyes on until now.

A little further on we reached the village of Baslow where Rob had arranged for some relatives to pick him up and take him back to his car. So with my companion gone, the final stretch along the River Derwent to Calver felt quiet and a bit lonely.I arrived at the campsite to find 9 deserted caravans, no answer at the farmhouse and locked facilities. I pitched up anyway, the proprietor did turn up later and showed the magic way into the block. It turns out he had been at Youlgreave to deliver a blessing at one of the wells.

I had a day off and took the bus into Bakewell which was exactly what I needed. I found a bustling town centre where there was a cattle market, a regular market and more dressed wells. After my brother’s recommendation I had lunch at Bakewell’s acclaimed Austrian sausage restaurant which was very tasty and left me too full for the town’s more familiar export; Bakewell Pudding. Instead I took a piece of tart to have back at the tent. I had no idea that the pudding vs tart debate could be so divisive but since I’m not particularly fond of almond nor cherry I can take it or leave it.

The following morning I accidentally slept through my alarm and didn’t get going until 9:45. I schlepped it straight up out of the village and onto Curbar Edge which was easier than expected. Once on the edge the views to the west were extensive and I stopped frequently to soak them up.

I trotted along the edges stopping off at the National Trust estate of Longshaw for a welcome coffee. There were some light showers but the rain held off for long enough for me to descend off Stanage Edge and pitch my tent at North Lees just outside Hathersage. Unfortunately the site is plagued by midges and so I spent the rest of the day in my tent behind the fly net.

The rain commenced at around 3am and was still going strong when I packed up and left. My destination for today was a pub at Flouch about 18miles away. I retraced my steps from the previous afternoon and went straight back up onto Stanage Edge. The cloud was getting lower and on the top the wind was stronger so at a fork in the path I opted the lower one which should offer some shelter from the weather. It did, until the route turned and headed north which brought the wind and rain straight in my face and dampness started to permeate through my layers. I had only done 4miles but was getting cold and the prospect of another 14 across the desolate moorland landscape in these conditions filled me with dread.

I got to the A57 at Moscar and weighed up my options for getting out of the foul weather. Initially just some respite from the elements would be nice – could I knock on someone’s door? There were only a couple of houses so I approached the one that had the builders in but they wouldn’t let me stand in a dry corner to check the map and guidebook (no signal so Google was out). When I asked for some shelter one workman pointed at a tree and said “there you go”. So helpful – not! There was a bus stop and the next bus into Sheffield was in 30mins but a) I would get very cold save for doing star jumps on the side of the road and b) what would I do when I got to Sheffield? I rechecked the book and there was an inn about 1.5miles up a side road so I started to head there. I decided that if it was shut I would suck it up and continue, if it was open I’d stay for a warm drink and to dry off a touch but if they had rooms, well I would stay and try to rearrange tomorrow night’s accommodation. Well you can imagine the joy when the door opened and inside was a roaring fire – in late June! They had vacancies, and they let me use the phone to call ahead to the pub at Flouch who moved my booking with no charge. Ah the relief! I hugged a mug of hot water and sat by the fire to warm up. When I checked into the room there was a comfy four-poster bed (with chaiselong at the foot) but no shower, so alas I had to have a nice hot bubbly soak in the bath. What a difference an hour of hospitality can make! 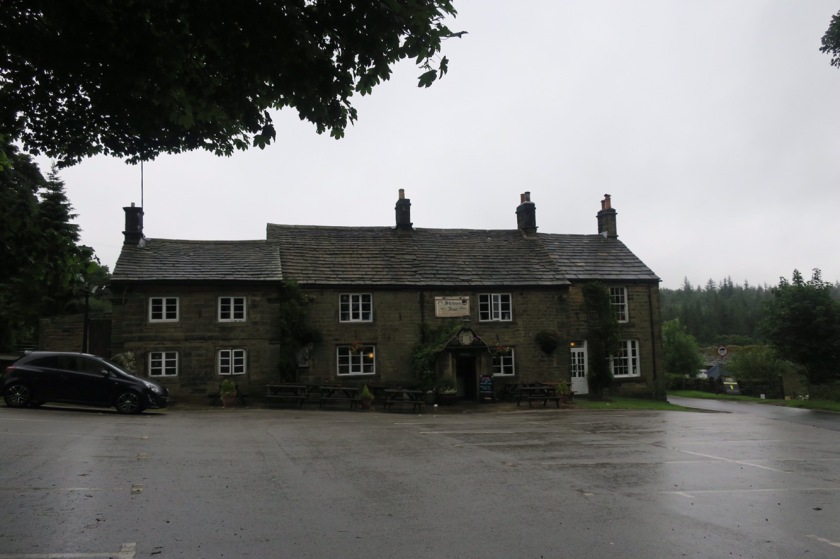 2 thoughts on “The rest of Staffordshire and into the Peaks”