Another gloriously sunny day on the South West Coast Path…this could be purported to be boring but far from it! Yes, everyday I see pale yellow sand, blue sea with foaming white waves crashing against the brown/black rocks, blue sky with white fluffy clouds and green fields but every cove, each twist and turn and all the ups and downs reveal different views as you go along. Early on in the morning I passed the Bedruthan Steps which are a series of rock formations out in the bay:

Then there are the people. In Porthcothan, just after I had my photo taken by an American lady who was doing a 10day cycling tour of Cornwall with her 3 girlfriends (1 of which was currently laid out by injury and another lost somewhere -I do hope she found her soon) then who should appear from around the corner? Only the couple who I’d heard about who are also walking LEJOG! Now known to me as Ronnie and Julie from Durham. (Hi Ronnie and Julie if you’re reading this, hope all is going well for you both and Ronnie isn’t moaning too much!)

We chatted pretty much all the way to Padstow via a couple of lovely beaches and also our first major inland ‘shortcut’. We headed straight into the middle of Padstow, mouths watering from the discussion about a bakery on the quayside who laid claim to ‘the best pastie in the world’, only to find it closed…so we went round the corner and picked up a reasonably tasty pasty. We then parted ways as Ronnie and Julie are doing this walk ‘properly’ by walking all the way down the Camel estuary to Wadebridge, whereas I had opted to take the ferry to Rock.

Ronnie, Julie and I at Padstow harbour

Once in Rock I traipsed across the dunes, all over St Enodoc Golf Course and had an adrenaline fuelled encounter with some cows. It resulted in me having to lob my rucksack over a couple of fences and following over them myself (including getting zapped by an electric fence) but I finally made it up to Trewiston farm which was a very empty campsite, with a dramatic night sky: 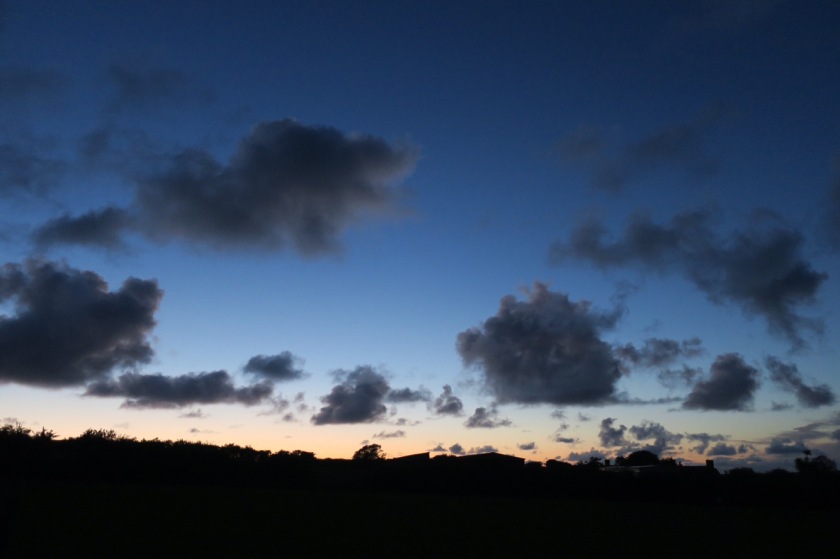 Set off and continued on an inland route and made a ‘bee’ line to Porteath Bee Centre to pick up some local honey and honey fudge…mmm yummy. Also went inland from Port Quin towards Port Isaac where I met a guy who walks laps of Cornwall for faith, now that is dedication, that must get very tough! Arrived in Port Isaac to find crowds of people and large amounts of TV crew; it turns out that Port Isaac is Port Wenn in Doc Martin and Martin Clunes himself was there so I got a quick snap and then passed through the crowds to get on my way. Took this as a nod to my little nephew:

Lots of ups and downs all the way to Tintagel YHA which is in a stunning location right on the cliff tops and has been recently refurbished so feels more like a hotel than a hostel (also helped by having a dorm to myself). Unfortunately I didn’t spend a huge amount of time in the hostel because I went out for dinner, in part, to celebrate getting through the 100mile mark!

View from Tintagel YHA – “Where ever I lay my hat, that’s my home”…!